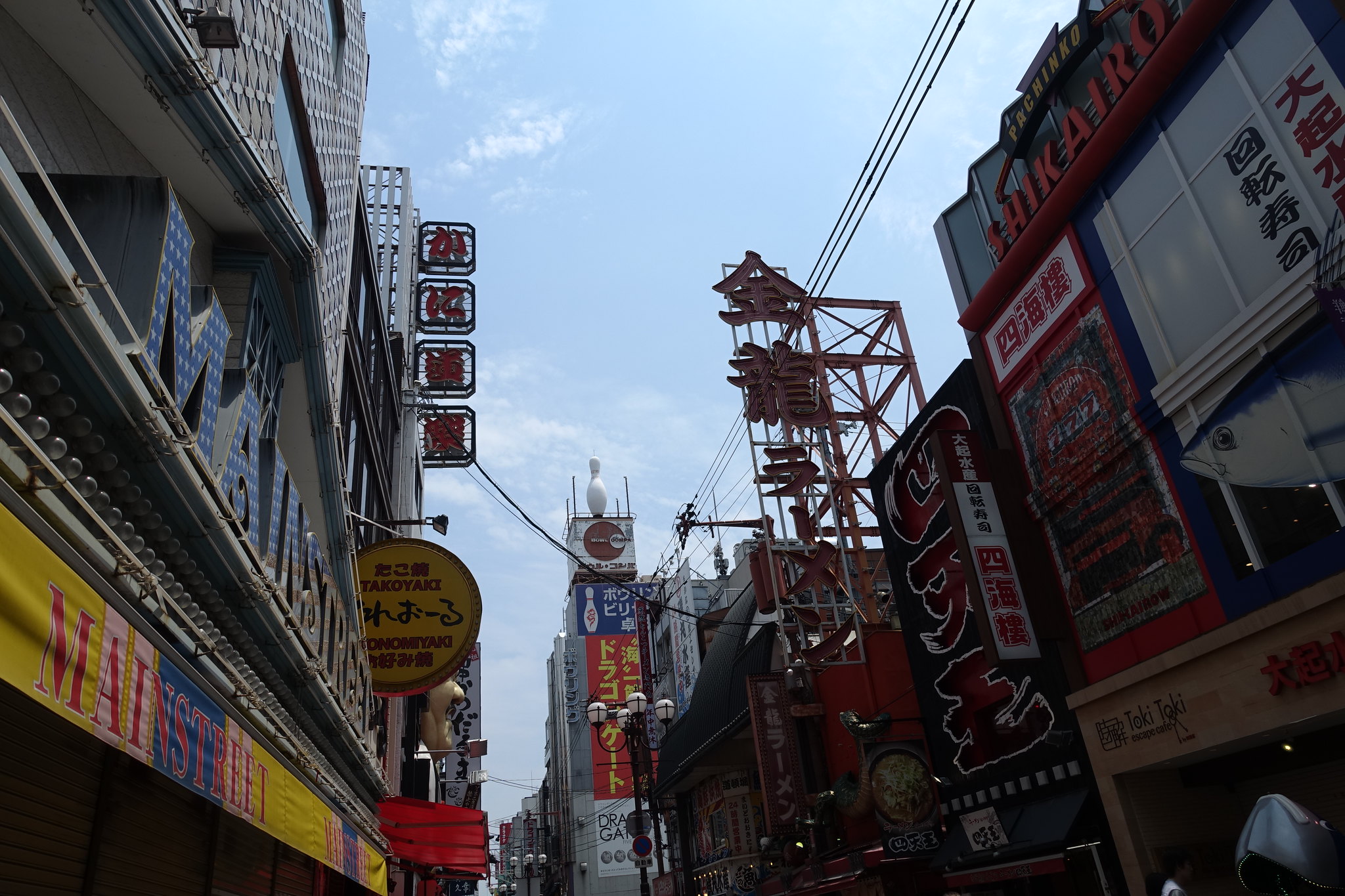 I’ll be posting a lot of backlog from my last Osaka trip so this is just a heads up. I get a lot of messages from family and friends asking me what my favorite Osaka food finds are so I thought it’d be convenient to just post them all here for everyone to see. 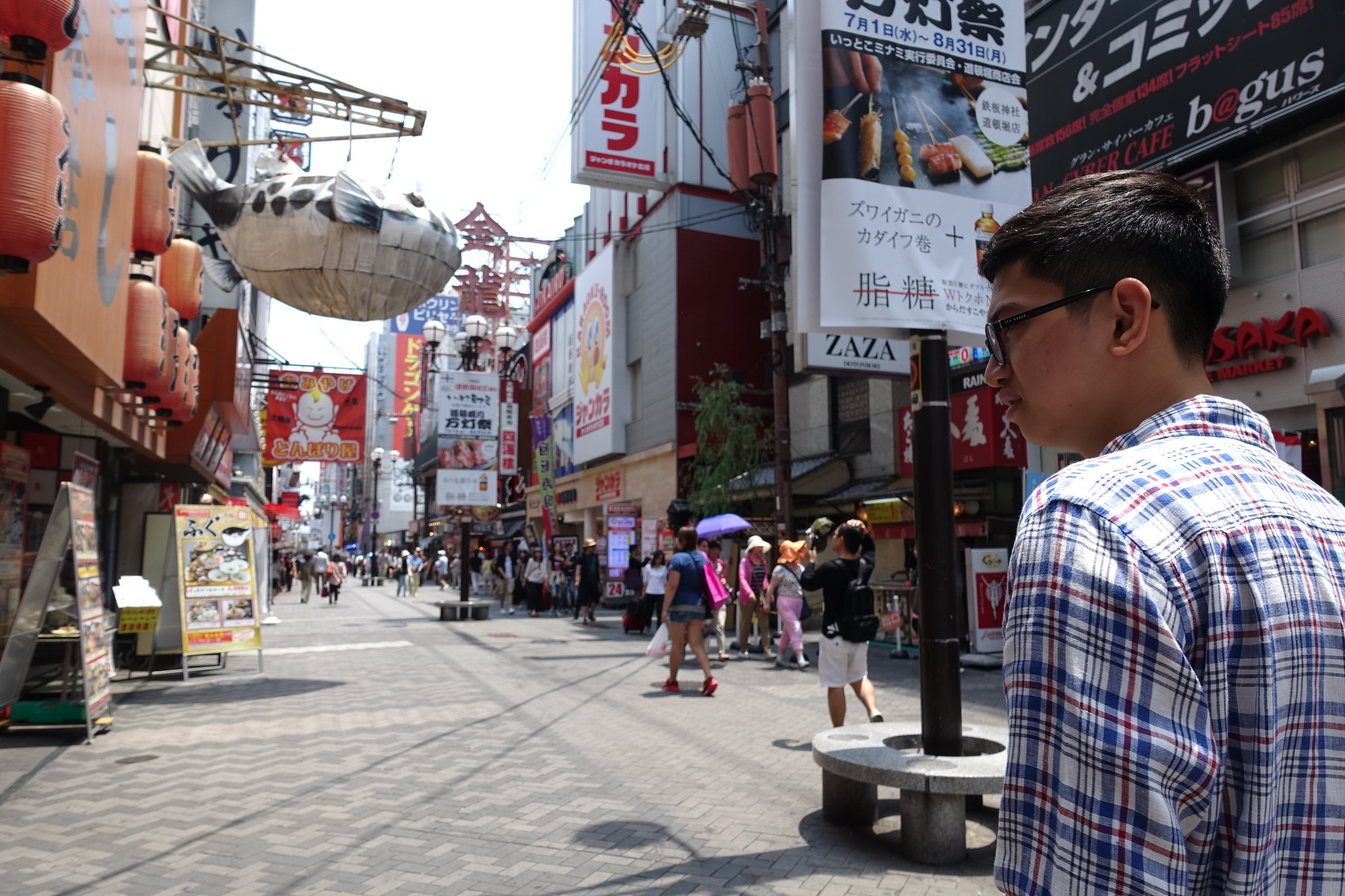 I have no idea what this restaurant is called but we found it when as we were walking around Dotonburi for brunch. It was a brightly lit take-out sushi and sashimi joint where all the fish is freshly packed and refrigerated, just like in the grocery aisles. What sets this place apart from a grocery is that there are stools and high tables on one side where diners who buy their fish can dine. The tables have soy sauce, tissue and chopsticks and the place sells drinks as well. 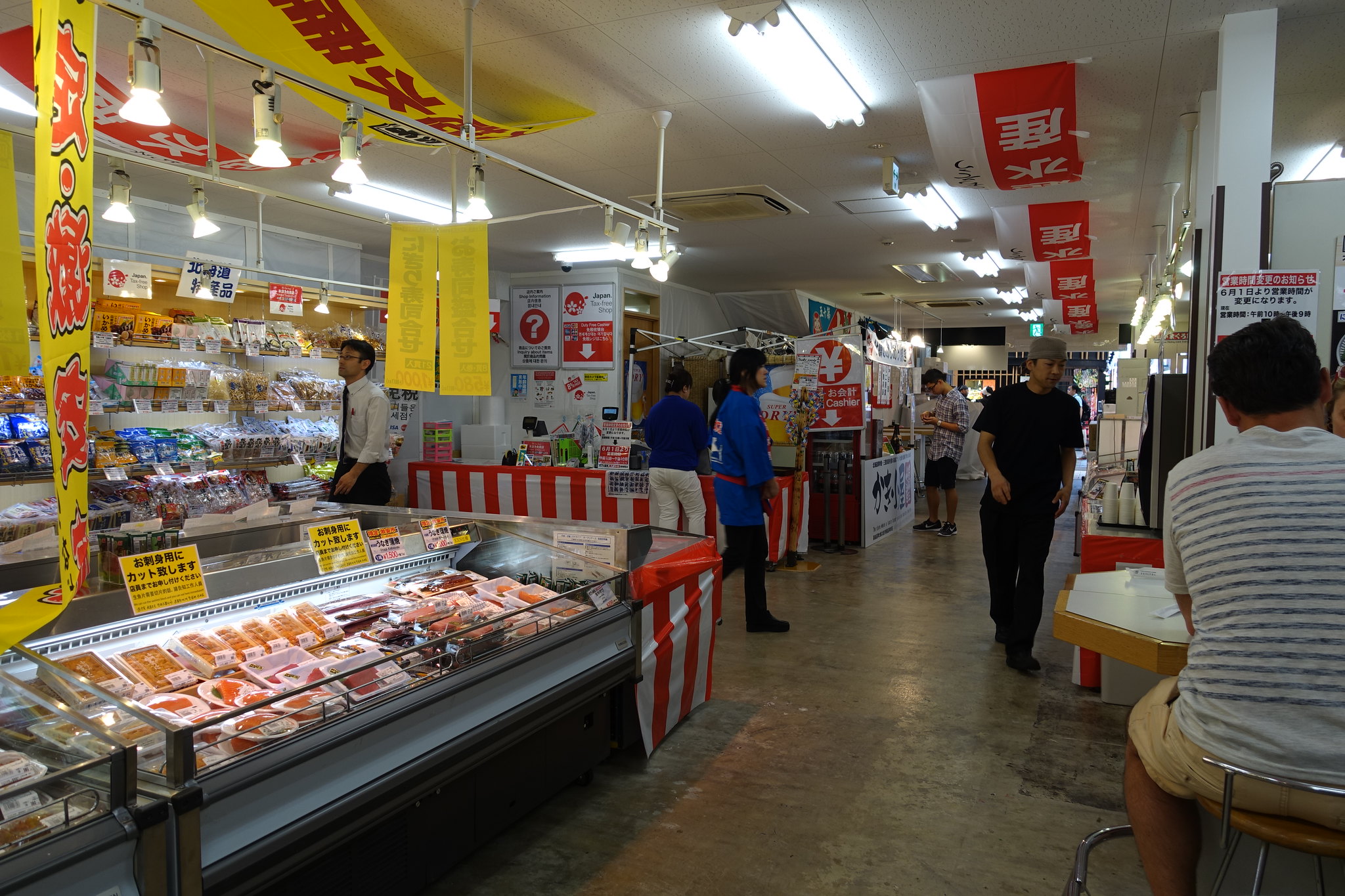 It’s a pay at the counter kind of place. I can’t say it’s a restaurant cause it’s a lot more like a deli with rows and rows of pre-packed sushi and sashimi. 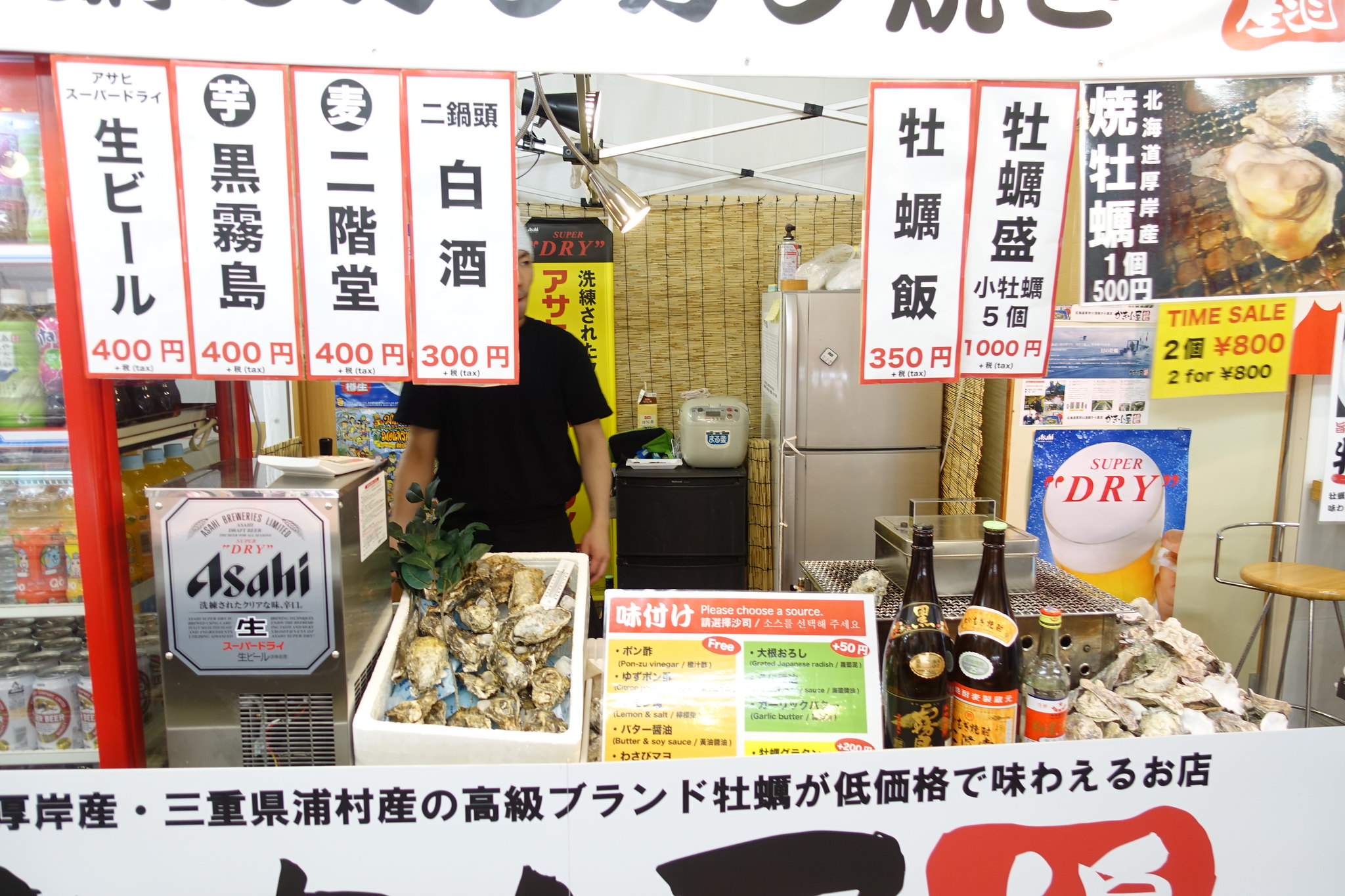 There was even a booth where they were selling fresh and grilled oysters for ¥400 a piece. 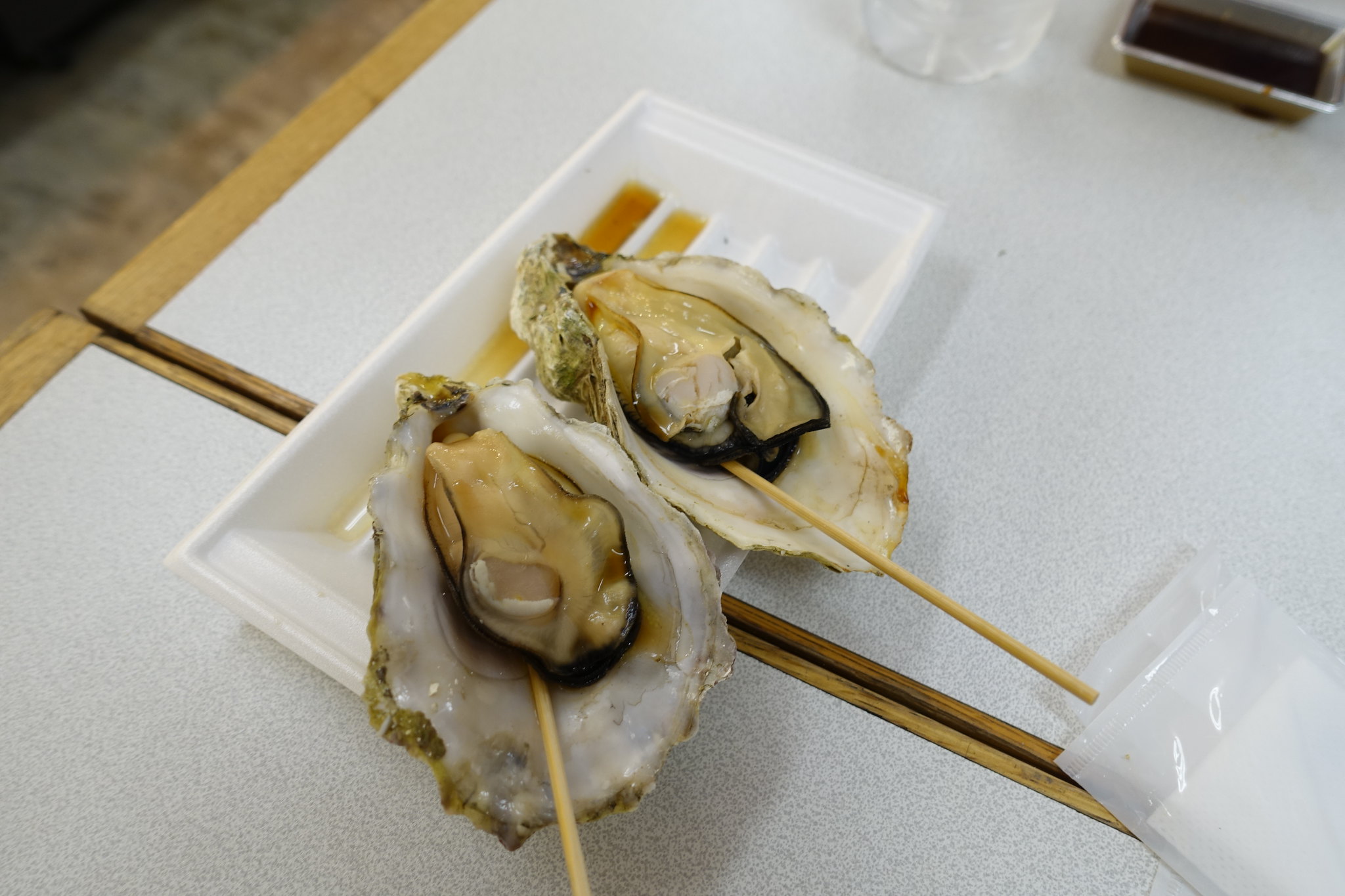 We had grilled oysters topped with soy sauce, butter and lemon. 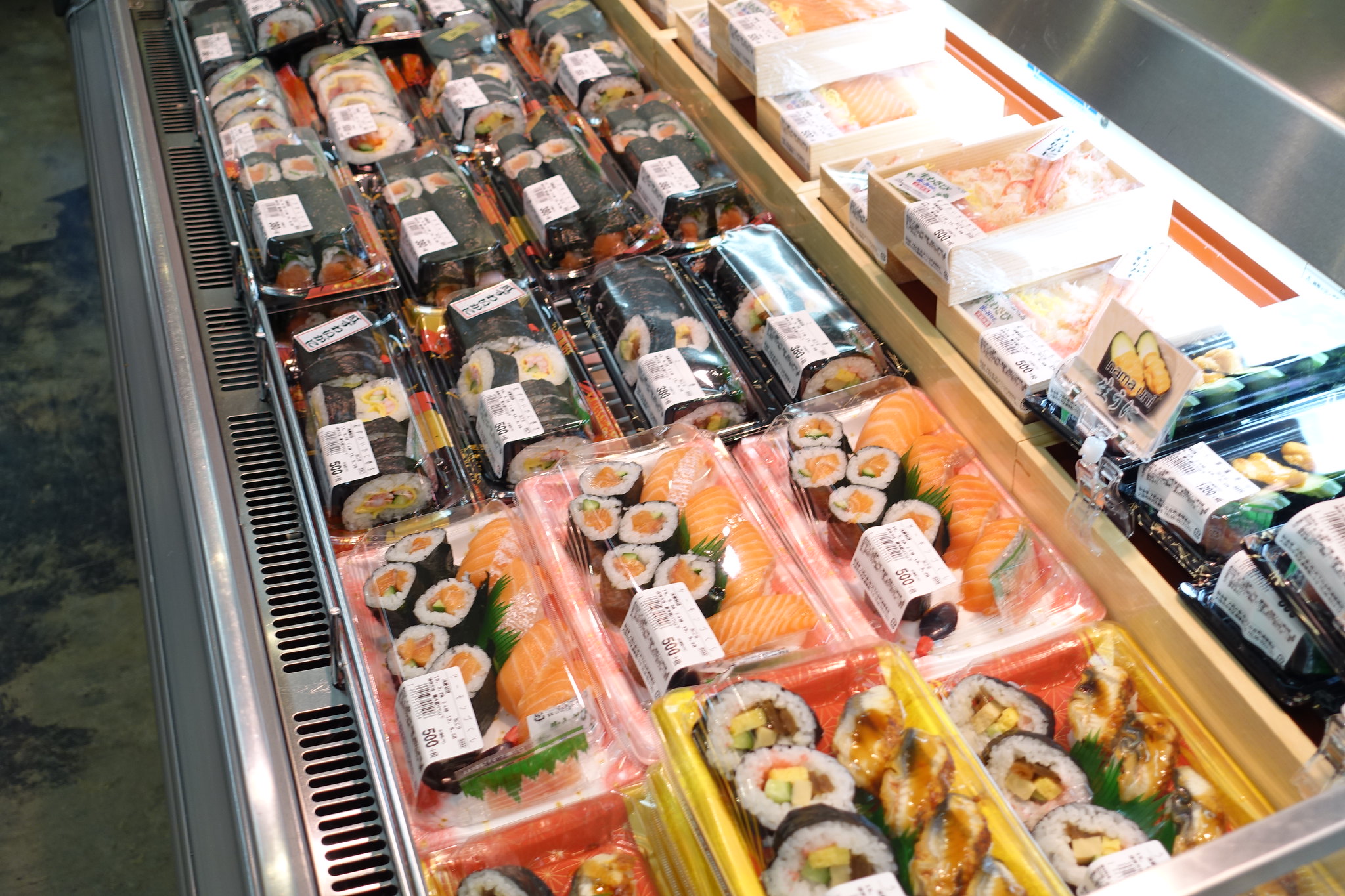 Then we looked through the different rows of fish and picked out the stuff we wanted to try. There was a wide array of sorts, from the affordable to premium. 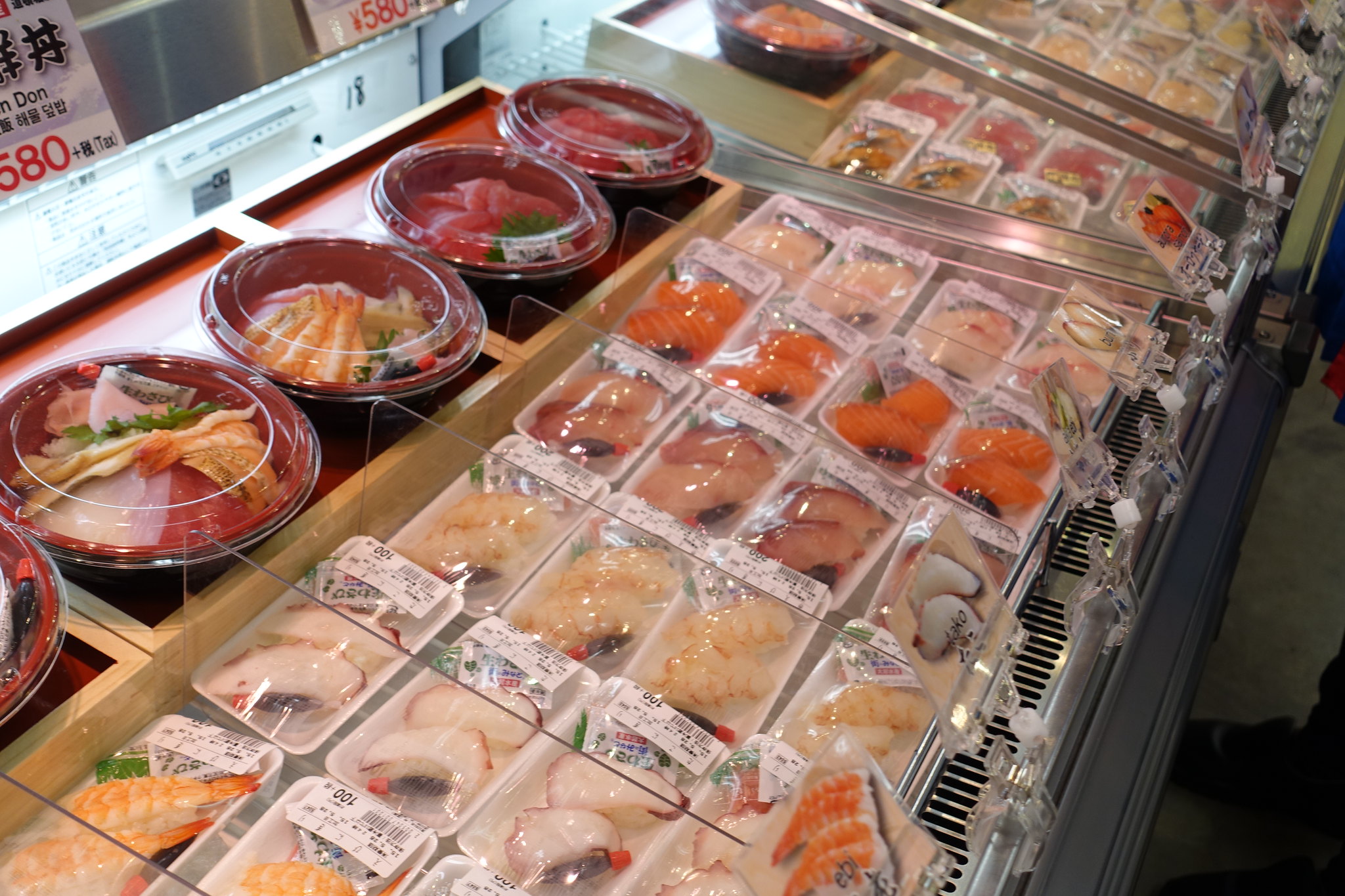 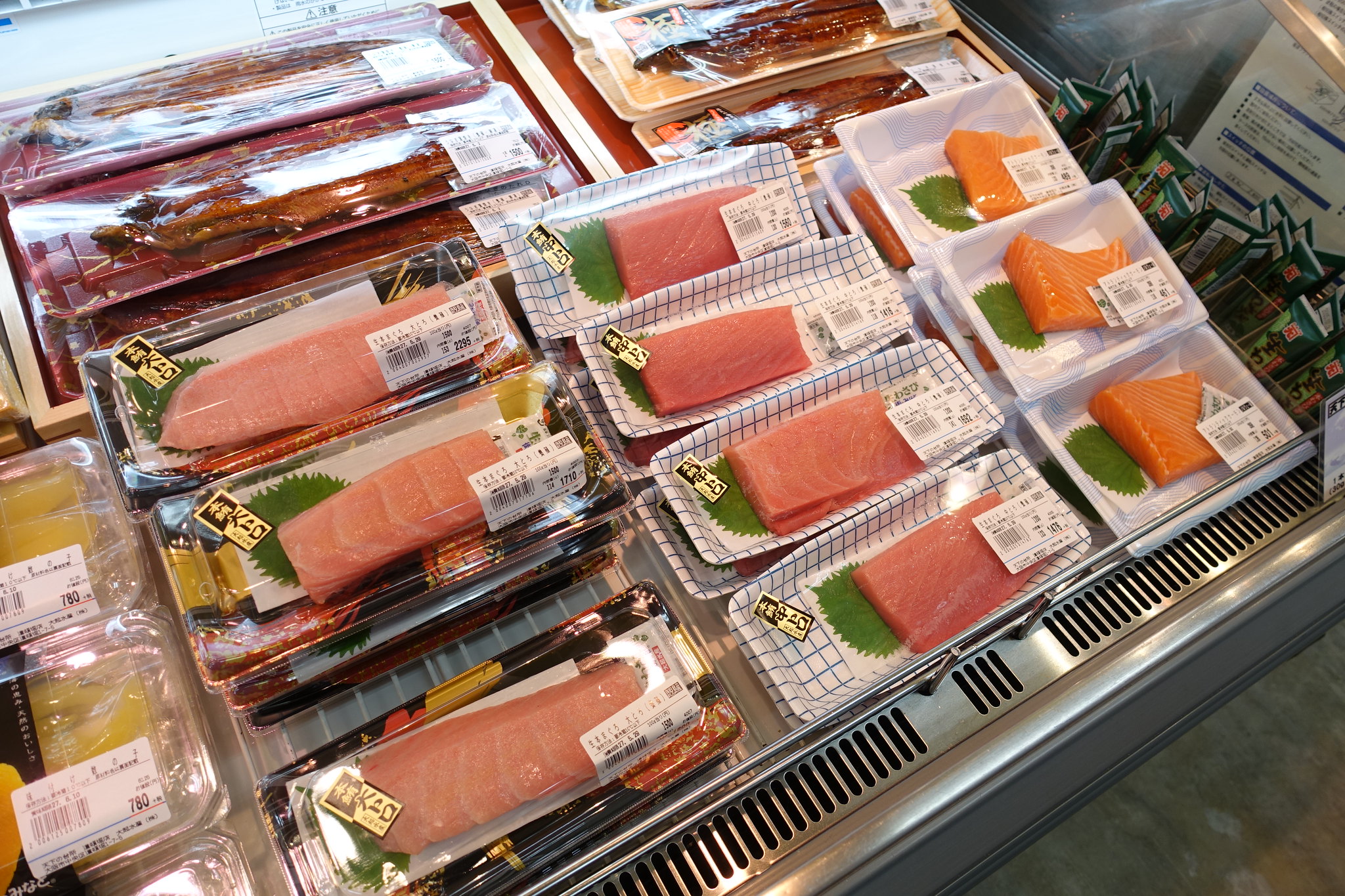 I was happy to see fresh slabs of otoro in the mix. It’s the fattiest best part of any tuna and comes straight from the belly. It’s usually pricey but in this fine establishment, Otoro Sashimi was ¥1500 which at Php 550 is affordable. 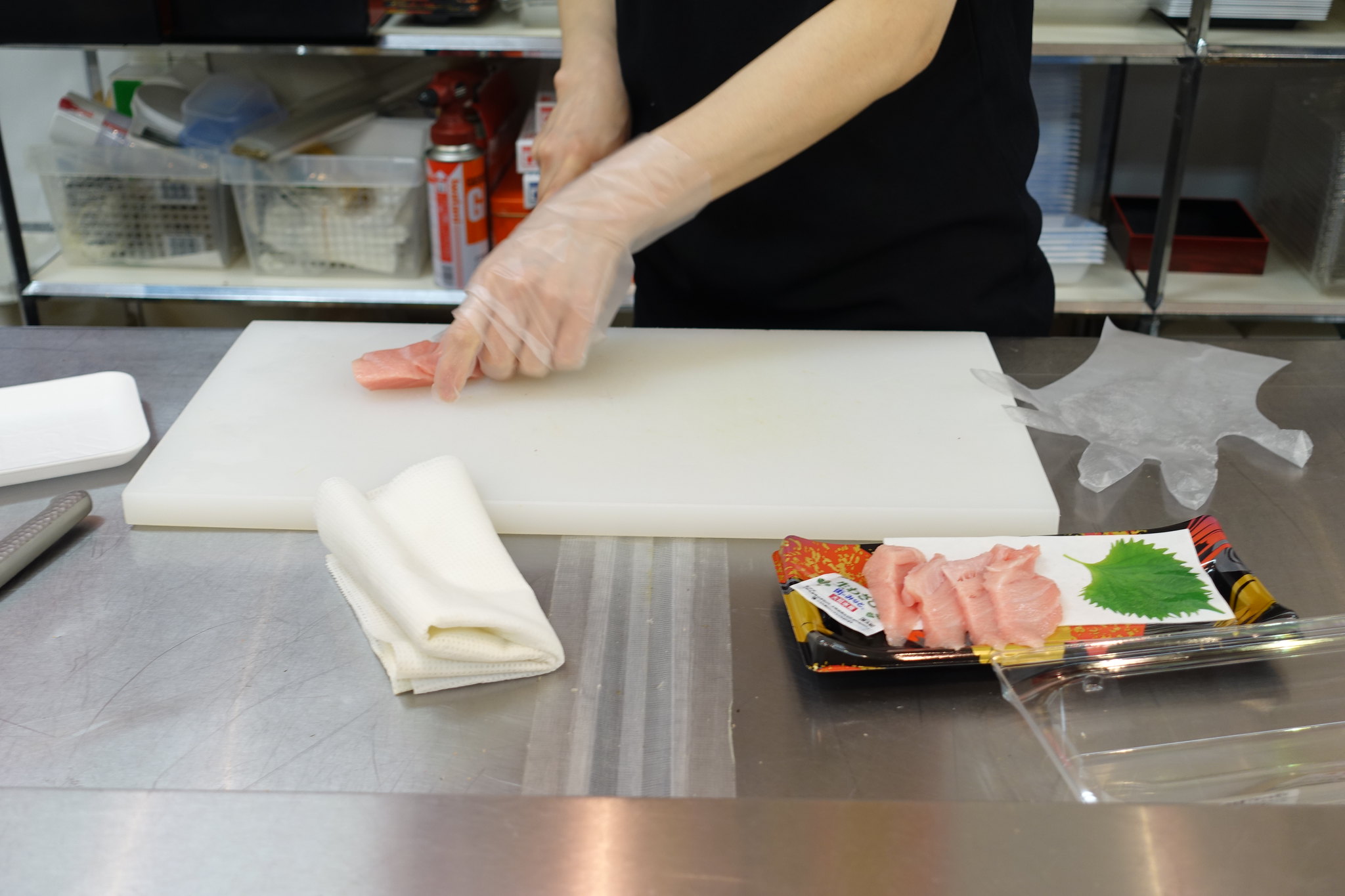 Of course, I ordered it. After paying, you can have it sliced by any of the chefs on-hand. If they’re not prepping stuff for customers, you’ll find them slicing and packing more fish and putting them in more take-out containers. 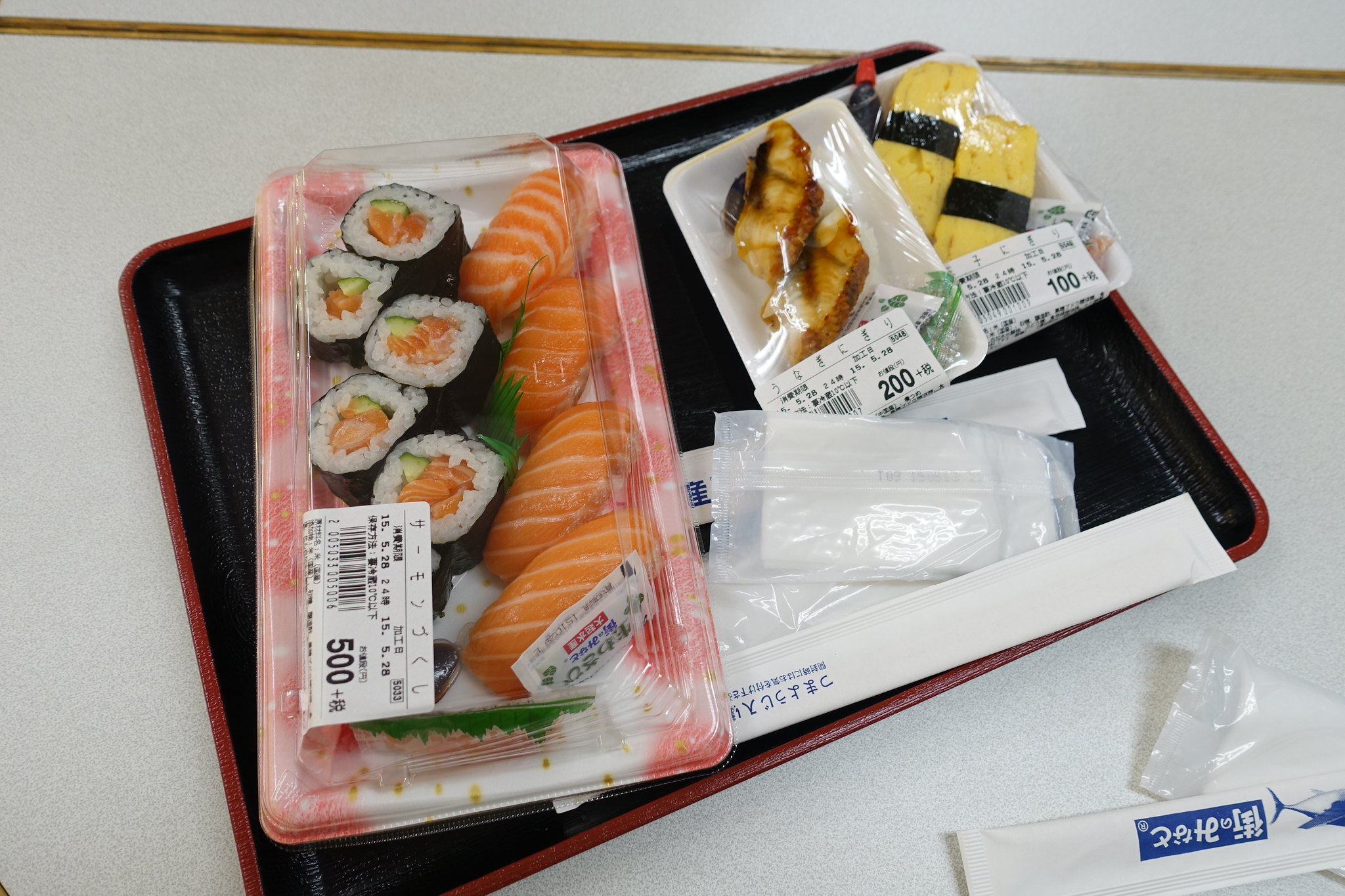 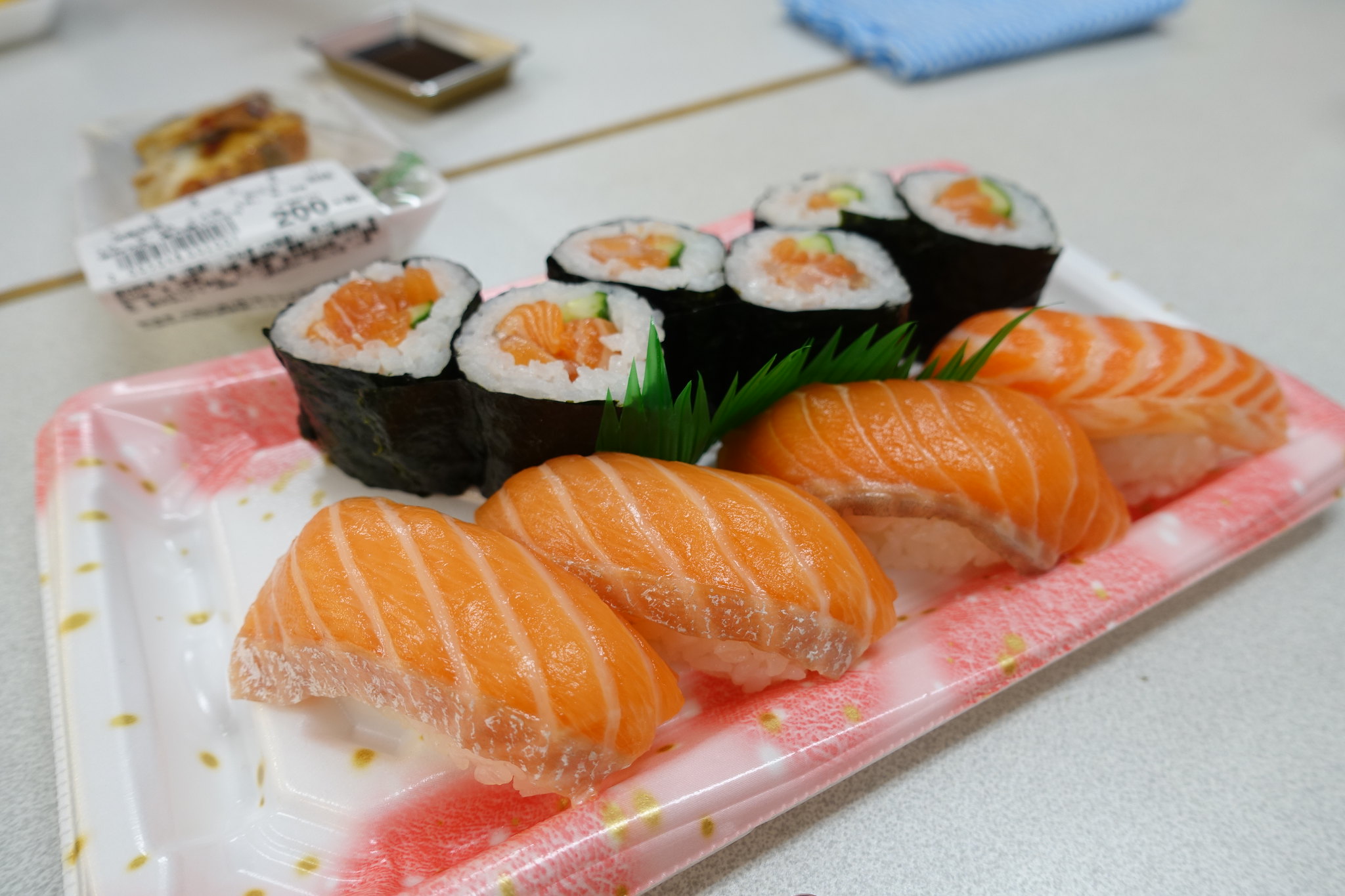 Look at the stripes on the salmon slabs, absolutely gorgeous. Tasted great and fresh as ever. 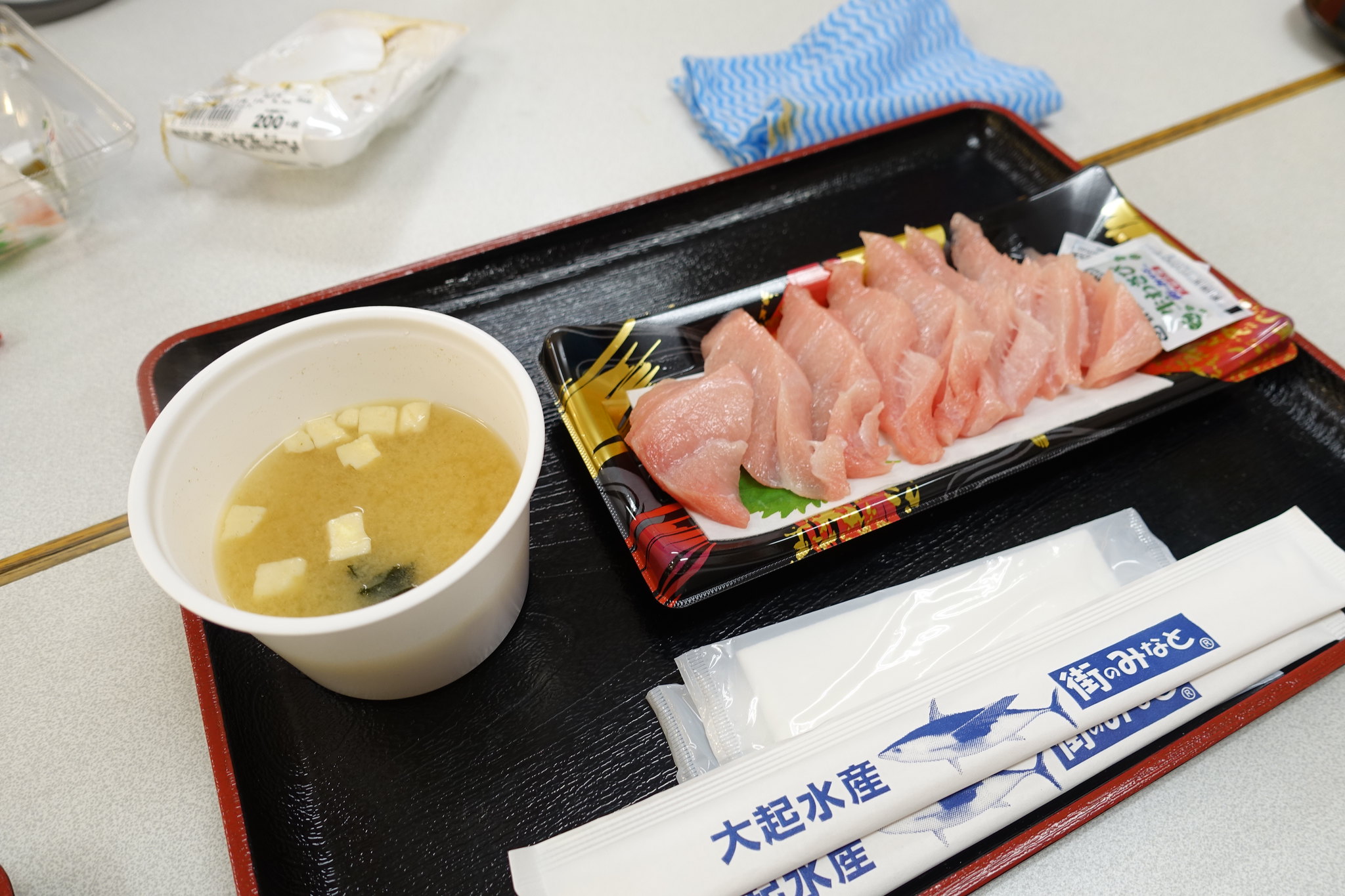 The Otoro was served with hot, seafood miso soup with baby clams. It was the best sashmi I ever tasted. It melts in your mouth just like butter and it’s rich, creamy and just such a dream to eat. I savored every second I had it in my mouth. It’s best eaten with your eyes closed. 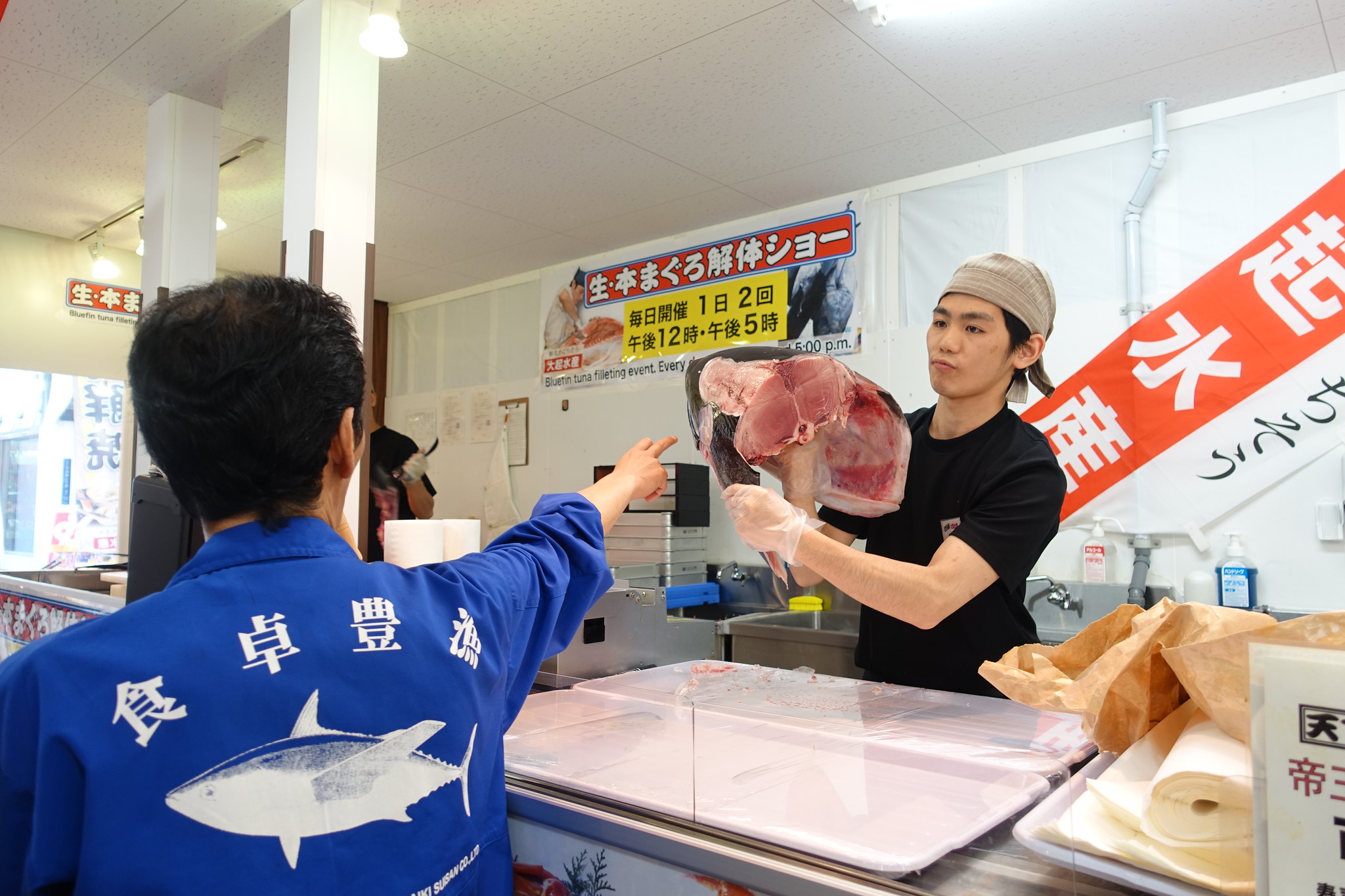 We also saw that they were filleting a huge tuna by the time we were done eating. It’s some sort of tourist attraction there. There are guys gutting and cutting this huge fish and showing the different parts of meat inside.

Maybe you’ll all laugh at me when I say this was one of the best sushi/sashimi meals I had in my life. Never cared much for ambience and I find that the most unassuming places end up surprising you. What makes this place so special to me is how fresh everything is and the quality of the products and the prices all just don’t add up! It’s too good to be this cheap but I’m glad. Thank you Japan for going above and beyond my expectations every single meal.

When I was on vacation in the US and I’d miss Filipino food, Thai, to me, was always the next best alternative. I was in New York craving pad thai more than once my last days there and the Thai joints I happened into would never disappoint. Despite the closer proximity to Thailand, getting a tasty padthai dish in Manila isn’t as easy so I was on the hunt. My cousin recommended a relatively unknown restaurant close to Kalayaan in Makati called Dek-A so I went and checked it out.

Finding it wasn’t too difficult. I cut through Rockwell, hit Kalayaan, made a right on Fermina St and saw it on the 3rd block. The back-lit white sign was hard to miss.

This branch is just their second and it’s pretty new. They basically renovated an old house and turned it into a restaurant.

I flipped through the menu pretty quickly already knowing what I wanted. Food was reasonably priced, the restaurant was absolutely empty which only meant that the kitchen was ours. I was excited. We got these two mugs of Thai Iced Tea (Php 60) which I found to be really close to the ones I’d drink on the street in Bangkok. I liked that I could really taste the condensed milk in it but that it felt smooth and not overpoweringly sweet. If these came in pitchers, I’d order that.

Our food came all at once and that was something to be happy about.

I thought this’d be hard to get wrong so I ordered the Pad Bai Gra Prao (Php 220) which is basically ground chicken bits fried with basil and some chili. What I got though was different from what I had in mind. I’ve always enjoyed this dish dry but whatever, I suppose this is another way its prepared. I thought their version if it was just overpoweringly salty I couldn’t really taste much else. I found the serving to be generous but if it just tastes like salt it’s pretty useless right. So much for basil and chili, definitely a wasted order.

Now for the big event, the reason I sought this restaurant out in the first place. Dek-A’s Pad Thai (Php 180) seemed promising at first but really, it’s just okay. It’s a big enough serving to share with a friend, there were just enough noodles but it seriously lacked in protein. Basically, the two shrimp sized prawns you see in the photo are the only ones in the whole serving. Flavors were a good combination of nutty, sweet and mildly spicy. The noodles were perfect, texture wasn’t sticky but having no meat in there, no egg, no chicken bits, shrimp bits, whatever, it was really just lacking.

Gang Kiaw Wan (Php 220) is their Green Chicken Curry dish, chicken bits and eggplant swimming in a green coconutty base. I tried the sauce first and the flavors in it were just perfect. It was full-bodied, milky and sweet with a gentle spicy after taste that only leaves you wanting to more.

What I didn’t like about this dish though was that it didn’t feel like chicken curry. An accurate name for this would’ve been Green Eggplant Curry with Chicken bits. Again, we have a protein problem. Not. Enough.

Pandan Iced Tea (Php 25). It is what it is and everything it’s supposed to be. Refreshing and light, send me a pitcher.

Presenting this unhappy gangsta, who I had the pleasure of sharing a mediocre meal with.

The verdict? These guys have good drinks. I honestly don’t think I’d ever go back. Food sounds cheap and all but at the end, it was Php 769 which to be honest wasn’t really all that worth it. I think I would love to eat their green curry though but on my own terms. I’d probably buy two servings for take out and put my own chicken in the mix just to make it better.

If you guys have eaten there or are curious to give it a shot, let me know what you think.

I hadn’t been to Wabi-Sabi until just recently even though I’ve been to The Collective already a countless number of times. I’m always there for gigs which start late all the time so the shops are mostly closed. On this particular trip, we had a terrible dinner at Bamm so super unfulfilled, Carina suggested we drop by Wabi-Sabi to grab another bite.

Being a noodle house, the place is known for two dishes: the Fernando Pho Jr. and the Ramen Padilla. I’ll be back for those cause I was too full already from the awful attempt at Chicken Doener (from Bamm). This is my silly girl doing her best Oblina impression.

We ordered palette cleansers in the form of Thai Milk Tea (Php 50) and Lemongrass Tea (Php 45) which came chilled and in these big glasses. They were quite good too since the sweetness was blunt. I don’t like overtly sweet drinks or artificial ones; these were good as home-brewed. I was also super curious so I ordered a slice of Vegan Chocolate Cake (Php 75) which tasted just as good as regular chocolate cake. How unbelievable is that?

And we shared an order of Vegetarian Gyoza (Php 100), just cause. I really love gyoza so trying this was a pleasant surprise. I think they stuffed it with mushrooms instead of meat. It was so tasty and it didn’t taste wrong or off. Definitely ordering this again.

Wow, the food at Wabi-Sabi was exceptionally cheap and good too. I’ll be back for sure. This place is a rare gem in over-priced Manila; you can get awesome food without breaking the bank. Plus, it’s probably healthy too.

I haven’t posted about this because I haven’t reconciled with the fact that I’m on a show. I’m used to being behind the camera, not in front of it but here it goes. I’m shooting and hosting a web series called Takaw Tingin. It’s a video project that aims to showcase Filipino culture and local destinations with food as its major highlight. I have 6 episodes coming out in total and the first one’s up. I apologize in advance for the second-hand embarrassment you’ll feel after watching my awkward self trying to not be awkward on tape.

Click the photo to watch! This was shot with a Canon Vixia HFM50 and a Canon S95. I’d like to thank Eyedress for letting me use Teen Spirits for the OBB; Nicky Daez, Sabs Bengzon and Jason Conanan for shooting with me and Roel Mendoza for the edit.