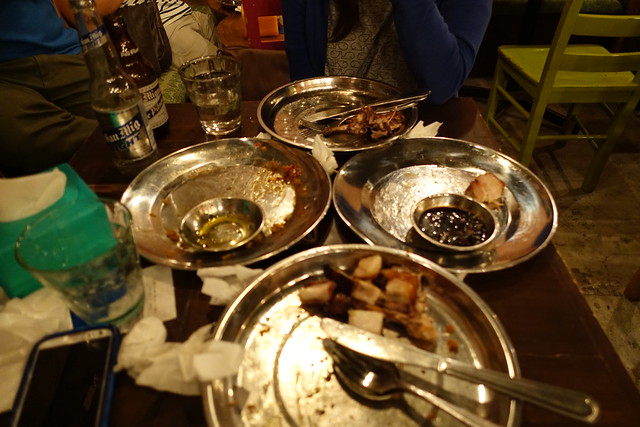 Lets start with the aftermath. I ordered half a roasted chicken, two spicy rice sides, one patatas bravas and lechon asado. I obviously enjoyed this meal as did Kathy. 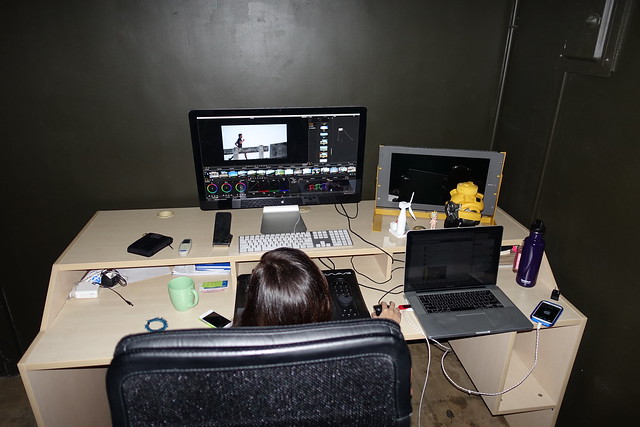 I was in the Timog area that day because we were color grading the music video I did for Ang Bandang Shirley’s Nakauwi Na. It was the first time I was at Quantum and the whole idea of being in Timog excited me cause it meant I could finally go and try Señor Pollo. Here’s a quick flash photography portrait of what the color grading set-up looks like. The entire act takes a lot of hard work and it’s pretty tedious since you can pretty much manipulate colors in any part of the frame. Imagine, Photoshop in video form. 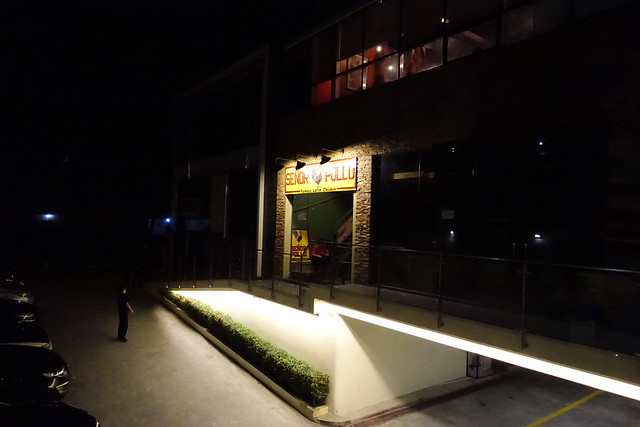 I was there since 3PM in the afternoon. We were working straight until the evening until we decided it was time to go look for food at around 10PM. Since I was reading up on Senor Pollo all day, I knew we were safe cause it’d be open til 1AM. Finding the place wasn’t as hard as I thought it’d be, when you’re on Tomas Morato heading straight for the Timog side, Scout Rallos and the F7 building would be on your left. F7 is a nice building with interesting dining choices like Purple Oven and Uncle Moes. The best thing about it? Valet parking. I didn’t avail of this service since there was a lot of space. 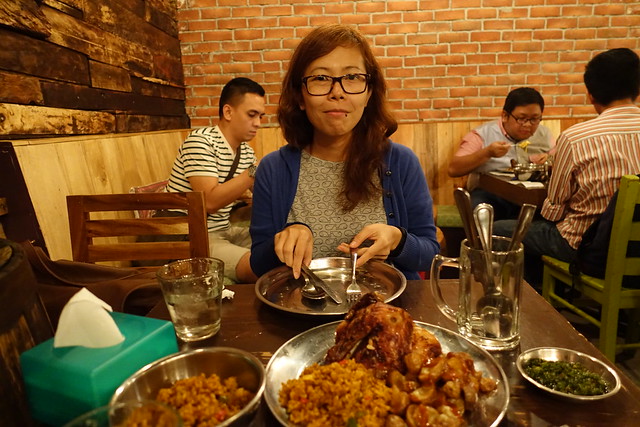 ON TO THE CHICKEN! Kathy and I decided on sharing a Half Order of Roasted Chicken + 2 sides (Php 299). For sides, we picked the Spicy Rice and Patatas Bravas. The chicken itself is served with chimichurri sauce and garlic sauce. We ordered an extra order of Spicy Rice since it was awesome and later found that it was the last batch of rice in the restaurant. Score! 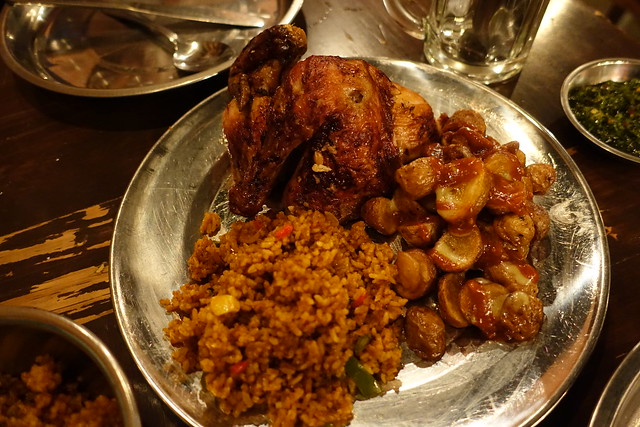 Oh man, this was heaven. I mean, just look at it. Took my first bite and I was hooked. The chicken was tender and roasted perfectly, that fire roasted flavor was spot-on: hint of sourness from the chimichurri, the creamy garlic sauce and the chicken combined with the spicy rice. 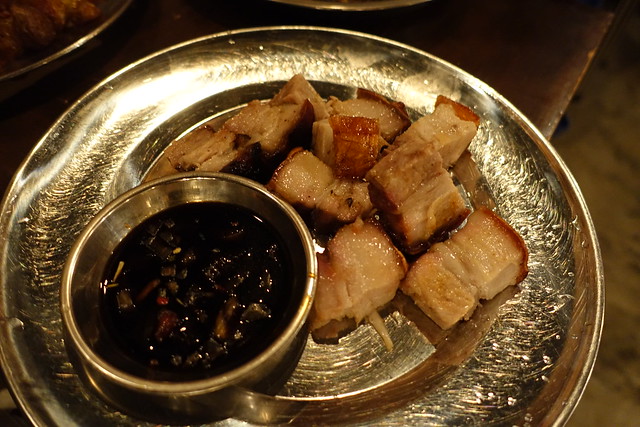 So. After trying this and liking it so much, I thought I wanted something more. Just a chicken quarter wasn’t enough so I settled on ordering Lechon Asado (Php 200) as well. This was good too but the chicken was way better. I thought the pork was too fatty. 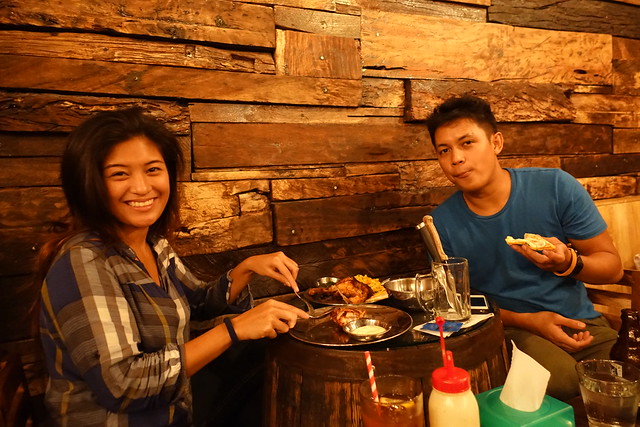 Aaron and Gen followed shortly and enjoyed their meal as well. Too bad there was no spicy rice left when they arrived. 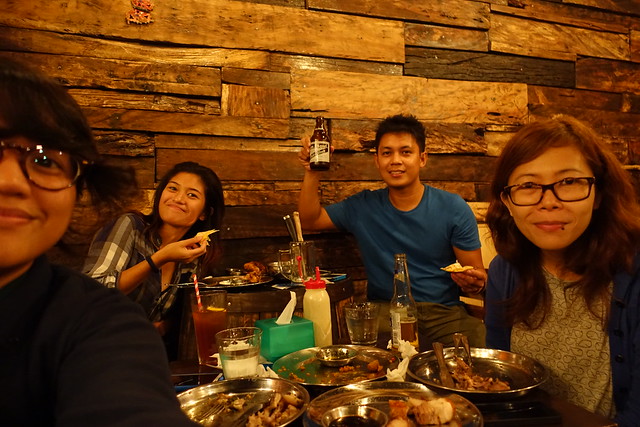 We were all happy campers. It was everyone’s first time at Senor Pollo that night. 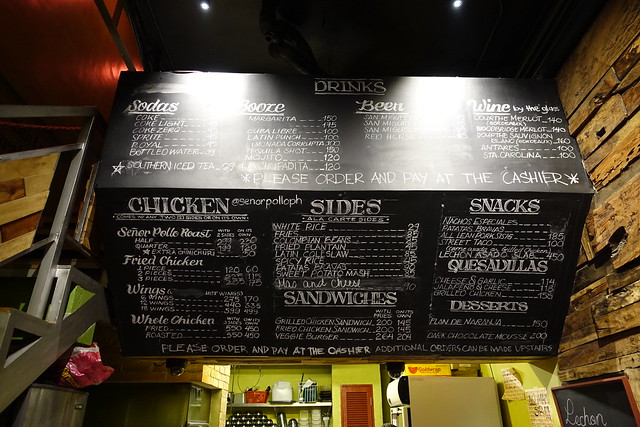 Here’s a shot of the menu for reference. Compared to the old reviews I used to read, they seemed to have increased their prices. I can’t complain since they seem to be doing well for themselves. I remember leaving a bit before midnight only to find that they’d already run out of chicken to serve. 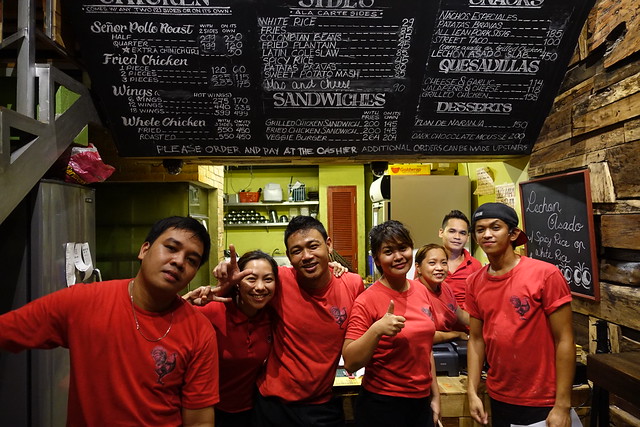 The waiting staff is great too. Knowledgable, polite and just pleasant overall. I drink a lot of water and I really liked how they were sensitive to that cause despite the fact the place was packed, my glass was always full. Can’t wait to be back! Hopefully I find myself in the area soon.

You all probably think that all I do in my spare time is eat. I can’t exactly blame you considering that I mostly just post about food. Taking photos and telling other people about what I eat really just is a natural inclination. I think though, that before this space here becomes known primarily for food, I better start posting about other things too.

I try to see as many art openings as I can. I started going around mid-college when I learned that a lot of them were an arm’s length away from home. Gallery openings are always fun, there’s always an abundance of food, wine and the prospect of finding new artists to follow. I’ve gained a few favorites through the years and it’s just nice to see how their work evolves through the course of time.

The idea for Display came to me earlier this year because it always sucked when I had to miss a show. I wanted to find a way to make people feel like they weren’t missing out even if they didn’t have time to hit the opening. Display is primarily a web series that chronicles exhibitions and events within the Manila art scene. I already have 7 episodes up online so check them out.

“Cosmetic Order” is a group exhibition by Oscar Floirendo, Claro Ramirez and Eric Zamuco at the MoSpace Gallery. The exhibit runs from October 22 to November 20, 2011. Mo Space is located at 3F MOs design Building, B2 Bonifacio High Street, Bonifacio Global City, Taguig, Philippines. It’s the building right next to Krispy Kreme. The gallery is open daily from 11 a.m. to 8 p.m.