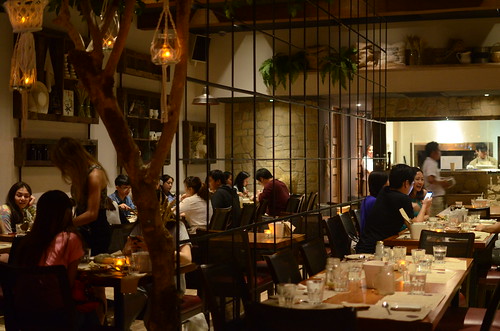 The Wholesome Table is this new-ish restaurant at Bonifacio High Street Central that serves organic, all-natural food. The general trend in eating these days is to go ethical – which basically means that we should think about the moral dimensions of what we’re consuming. Don’t eat at the earth’s expense. Carina and I decided to grab dinner there last Saturday to see what the hype was all about.

Honestly, the menu was overwhelming and there were a lot of interesting options I wanted to try. I was bent on ordering the meat loaf but Carina laughed so hard in my face so I retracted. Who orders meat loaf anyway? I know it sounds funny but the description sounded great – mashpo and all.

I decided to go all out. I thought, I’m at this organic restaurant might as well get something vegan. I got one of the two vegan options on the menu, the Vegan Burger (Php 390). 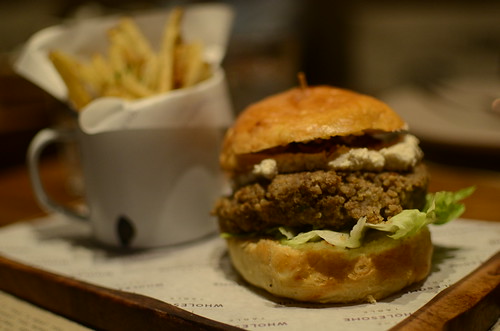 When the order came, it was massive which is something I was really happy about. What I didn’t like though was that the patty was served to me at room temperature and that it was under-seasoned. As you probably might remember from my past entries, I’m not hot on bread so I had this burger open faced. Taste wise, I liked the onion jam a lot. I think it made the dish OK. The patty was crumbly and didn’t stay in place very well, it didn’t help that it didn’t taste like much either. Maybe I should’ve gone with the meat loaf. 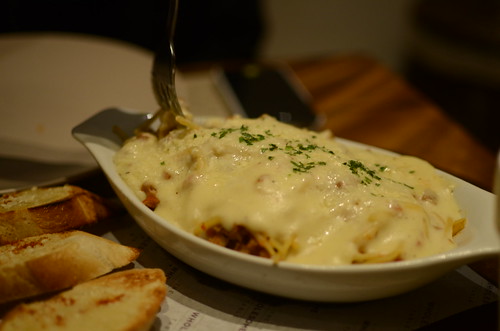 Carina didn’t feel like having meat that night either so she ordered the Vegetarian Bolognese (Php 490). I honestly wouldn’t call this bolognese, I find the name to be deceptive at best. They used tofu in place of ground beef which I felt really worked for this dish, they got the texture down perfectly so I did not miss traditional beef. What was lacking in this bolognese though was the tomato sauce… No trace of the red sauce, nope. I wish they just named this dish Cheesy Cream of Tofu Pasta since it was slathered in cheese and white sauce. This was better than the burger but also under-seasoned, some black pepper did the trick. 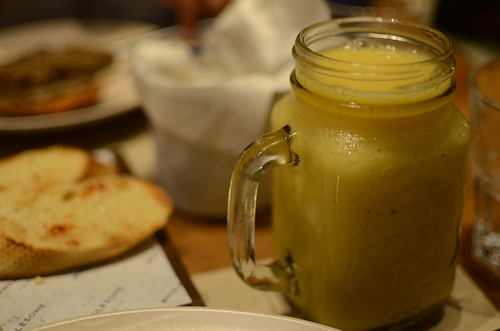 All the smoothies in this restaurant come with a hefty price tag at about Php 250 on average. Carina had the Be in Bliss (Php 250) which contains carrot, orange, coconut meat, banana, mango, pineapple and lime. Sounds like a whole lot but when we tried the smoothie, we couldn’t taste the eclectic blend. It was pretty good though, blunt, not too sweet. 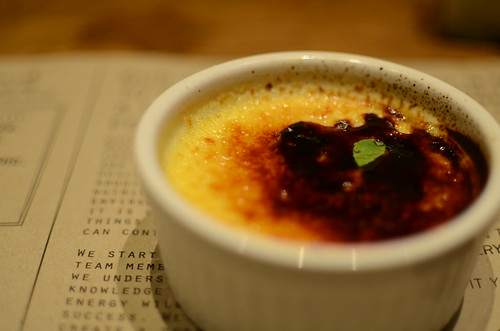 I was looking forward to dessert. The first and last time I ate at Wholesome Table, I just caught up with friends and had panacotta which I liked. This time around I wanted to sample some of that organic duck egg Creme Brulee (Php 150). I was really excited too because I had the best leche flan in my life in Pampanga and it was made with duck eggs. I thought this would be at par. I was so wrong. This was the worst thing I ordered that night. The creme brulee was rough and dense like tamago, a far cry from custard. It was obviously overdone.

Overall, the Wholesome Table is still in the soft opening stage so I don’t know how much will change in the coming days. Maybe I ordered the wrong thing. I don’t know but to be honest, I enjoyed the ambiance of the place, everything it stands for and I like it in entirety conceptually – what was on my plate though begs for improvement.

The best thing about the place was that the waiting staff is commendable, they really knew their way through the menu and were so easy to deal with. I liked that they were attentive. Maybe I’ll be back when the hype is gone and see how things improve when they’re in full swing. It’s still too early to say.